TechGirls, a program administered by Legacy International,  has been getting a lot of attention, the tech savy girls have created quite a buzz.   A Network of Young Innovators: These Are the TechGirls by Ann Stock, Assistant Secretary of State for Educational and Cultural Affairs writes in the Huffingtonpost.com article:

“On the 8th floor of Yahoo!’s Washington, D.C. office, the conversation is buzzing with 27 teenage girls asking questions. They were not asking about Yahoo! CEO Marissa Mayer, or talking about how they use Tumblr. Instead, “What is the total percentage of women who work at Yahoo!?” asked Imene, a 17-year-old from Algeria, or “What innovations is Yahoo! investing in to differentiate themselves from the competition?” asked Lina, a 16-year-old from Libya. 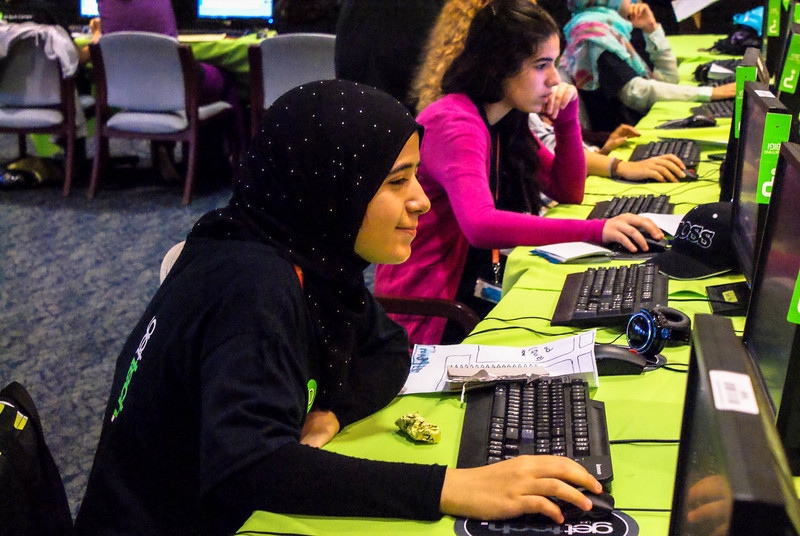 Former Secretary of State Hillary Clinton supported the creation of the TechGirls program in 2011, “to encourage innovation and promote the spread of new technologies to give women and girls the support that they need to become leaders in this field.” TechGirls came on the heels of the successful TechWomen, a mentoring program that pairs international female tech leaders with their American counterparts.

For the 27 tech savvy teenagers from the Middle East and North Africa, this was their first time in the United States. And it was quite the introduction to America. Over three weeks, the TechGirls met with high-level female technologists at companies such as Facebook and Google, as well as female political leaders like Congresswomen Suzanne Bonamici and Susan Davis. They built up their coding, web development, and 3D game design skills through hands-on training, and learned the different academic and career paths available to them in the tech industry.

When the TechGirls return home, they’ll use what they learned and serve as role models for other girls in their communities. Last year’s group of TechGirls taught technology skills and pursued goals for attending university, and it is no surprise that this group of TechGirls plans to do the same. Hafssa, a 15-year-old from Morocco, said she will share her knowledge of HTML, CSS and game design with other girls within her small community, as there are no other opportunities to learn [technology]. And Joanna, a 15-year-old from Jordan, wants to collaborate with TechWomen alumnae in her country to inspire more girls in her school to become interested in technology.

These young women demonstrate that forming more mentorship networks for women and girls in tech will help close the gender gap in science, technology, engineering and mathematics fields. The TechGirls have formed a tight bond with their American peers, public and private sector innovators, and soon with TechWomen alumnae back home. These networks will not only help them succeed in their careers and academics, but will cause a ripple effect in their community, where one girl’s success encourages others to pursue their dreams as well.